How Do Smartphones Use Time Stamps From Satellites To Calculate Your Exact Location?

When your phone tries to figure out its location, it pulls down at least three of these time stamps from satellites, each reporting a slightly different time thanks to the duration it takes the signal to travel from satellite to the GPS receiver in your hand. A satellite reporting a later time is closer than one reporting an earlier time. Since the satellites have perfectly predictable locations, the phone can calculate its exact location by triangulating among the three different time stamps.

Like the navigators of the 18th century, GPS determines your location by comparing clocks. This is one of the recurring stories of the history of the clock: each new advance in timekeeping enables a corresponding advance in our mastery of geography – from ships, to railroads, to air traffic, to GPS. It is an idea that Einstein would have appreciated: measuring time turns out to be key to measuring space.
. 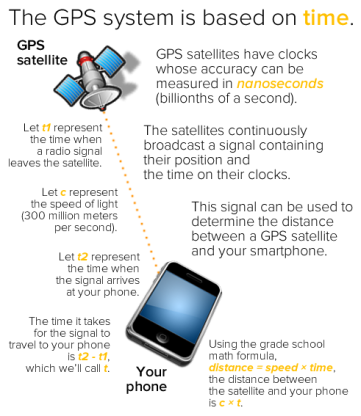 How We Got to Now: Six Innovations That Made the Modern World
Steven Johnson