Recently, I had to replace an old PC running Windows XP with a newer PC that had a newer version of Windows on it. Swapping out PCs is simple, but when you want to move programs, files, and settings from one PC to another it’s another story. The task is made especially complex when the install disks for the programs on the old PC are not available.

Why PCmover was Chosen

PCmover provides a complete, easy to use solution. According to Laplink, the makers of PCmover, it is the only software that will allow you to move programs, files, and settings. Whether Laplink’s claim to exclusivity is true or not is beside the point, PCmover does provide you a comprehensive method for getting stuff from one PC to another.

Anyone who can follow the step by step directions that come with PCmover can successfully use it. With PCmover you create a mini network consisting of the Old PC and New PC using the High-Speed Transfer Cable (it’s an ethernet cable) that comes in the box. PCmover is a user-friendly, Windows-based program, which provides menus and comprehensive directions on the screen of each PC during the entire transfer process.

To get the most benefits that PCmover can give you, be sure to purchase the Professional version, labeled PCmover Ultimate on the box (provides the most features and includes the High Speed Transfer cable). PCmover is readily available from the PCmover website for $59, though Office Depot/OfficeMax has it in their stores for $49. You could buy a feature-limited Express version for as little as $29, but it would be so crippled that for most cases it would be a waste of money. 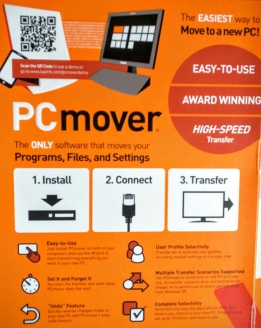 PCmover — What’s in the Box

Some Limitations of PCmover

thinking, reading, and writing about whatever's going on in the world...
View all posts by Gary Reiner »
« Emerson Lake and Palmer (ELP) – I Believe In Father Christmas
Crossroads: Great Movie, Great Guitar Duel »