Want To Dual Boot Windows 10 And Linux Mint? You Can Do It

Setting up a PC as a Windows 10 and Linux Mint 17.3 Dual Boot device is not too difficult, though it requires following certain configuration steps. Once in place, Dual Boot provides a boot menu from which you can choose to go into either Windows or Linux. You then have the ability to use Microsoft’s latest Windows offering, as well as, an option to take advantage of the power, flexibility, and simplicity of Linux Mint on your PC.

This example uses Linux Mint for Dual Boot, but there are many other Linux distributions one could choose, depending on what flavor appeals to you. Linux Mint was chosen since it is well established, easy to install & use, and is currently one of the most popular versions of Linux available.

Setting Up Dual Boot in a Nutshell 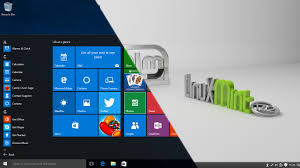 The first step was to fire up a new Dell Inspiron 3847 PC, configure the preinstalled Windows 10, and do preliminary testing to make sure the PC was working properly. Windows 10 is wonderful, but since my last experience with Windows was Windows Vista, three years ago, I had some catching up to do.

Initially, Windows 10 appeared a little imposing, but after digging around a bit, I was able to catch on. However, for a Windows rookie, or casual user, it seems Windows 10 might be overkill — Microsoft has crammed many, many features into their new flagship OS.

Solution: How to Get the Windows 10 and Linux Mint Dual Boot Menu

The default GRUB Boot Menu can easily be modified. You can edit boot item names, change boot order, delete items, modify timeout, etc. Too see how, refer to: Want to Modify Windows/Linux Dual Boot Startup Menu? You Can Do It.

Using some ingenuity, Dual Boot with Windows 10 and Linux Mint 17.3 can be properly configured. The benefits of such a setup are innumerable. To be able to easily move from one OS to the other is a boon. Now, over time hopefully Windows 10 will be mastered, while having Linux Mint nearby to use and enjoy.

Some Findings About Dual Boot Issues