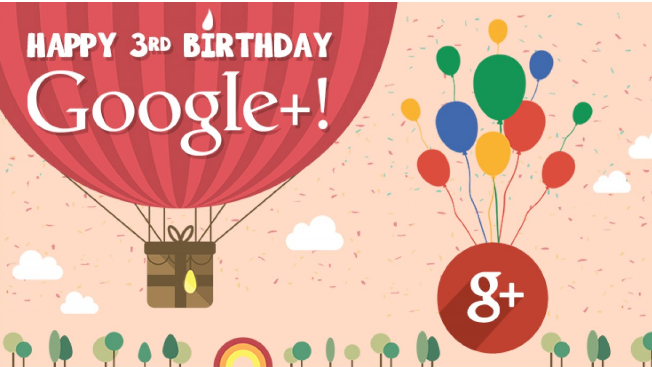 Somehow this almost slipped by – Google+ just celebrated its Third Birthday about 2 weeks ago.

Over the past 3 years Google+ has grown to 1.15bn users.  However, only 35% of those use are active monthly.  The Google+ numbers are based on an Econsultancy article, February 20, 2014.

So when looking at the Google+ numbers one might ask this question: is the user data a damning insight into the general malaise around Google+ or is it merely reflective of general social media sign up trends?

There are many social media networks you could stack up against Google+, but two come to mind that make a reasonable selection. Comparing Google+ to Twitter and Facebook, you come up with the following numbers:

So, Google+ comes out about the same as Twitter as far as users active on a monthly basis goes, but Facebook has many more users active monthly than Google+.

At only three years old, Google+ is still in its infancy, yet it has faced the harshest of criticisms and ridicule at times of all the social networks. Heralded as Google’s competitor to Facebook, Google+ has not taken off as some would have predicted, especially with the might of corporate Google behind it. Nonetheless, the social network is still in the growth stage and has been tweaked in terms of design and functionality many times since its inception.

The graph below gives you a good comparison of the number of active users on several leading social networks:

For anyone wondering what “QZone” is, the answer is pretty easy – QZone is China’s largest social network.

To get back to the Google+ aspect of this blog for a moment, Google+ is being used by Google to tie all of its products together from Gmail, to YouTube, to the search engine itself. All these products either give a new registered user a Google+ profile as standard, or like the controversial You Tube comments system,  demand a user to join Google+ in order to get involved.  There’s an eye-opening article recently on ZDNet which refers to Google+ as “three years old and still failing as a social network.”

Perhaps, it’s safe to say that Google+ is not going away anytime soon.  If it was, Google would have quite mercifully tanked it when the criticism over its user policies became more than boisterous over the past year. As far as the future goes for Google+, we’ll just have to see what Google has up its sleeve…

thinking, reading, and writing about whatever's going on in the world...
View all posts by Gary Reiner »
« Watermelons are Great!!
Cardinals Win Today and Tie for First Place »