The Nexus 10 is intended to be a high-end tablet and will compete with Apple’s 9.7-inch iPad. The Nexus 10 is built by Samsung and runs on a Samsung 1.7 Ghz Exynos dual core processor.

Additionally, Google said the Nexus 10 will have nine hours of continuous-use battery life and feature a 5-megapixel rear camera and a 1.9-megapixel front camera. The tablet will also have micro USB and micro HDMI ports.

The Nexus 10 will ship with Android 4.2 Jelly Bean.  One new 4.2 feature Nexus 10 users may enjoy is the ability to have multiple user profiles on a single device.  This feature supports multiple user sign-ins, with separate home screens, apps, e-mail and photos for each profile. 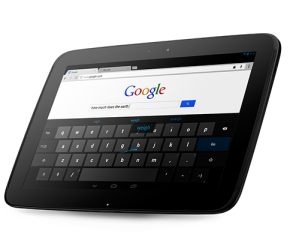 The Mountain View company said the Nexus 10 will be available for purchase online from Google Play starting Nov. 13. It will cost $399 for a 16 GB version and $499 for a 32 GB model.

thinking, reading, and writing about whatever's going on in the world...
View all posts by Gary Reiner »
« New Samsung Chromebook $249 — Rivals Tablet Prices
PCLinuxOS — It’s Free and it Works! »