Amazon’s Fire HD: One Week After the Big Announcement

Just a week ago, on September 6, Jeff Bezos, CEO and founder of Amazon, announced the new line of Amazon Fire tablets – the Kindle Fire HD’s, coming in both 7″ & 8.9″ sizes.  He spoke to a “by invitation only” crowd in Santa Monica.  His talk was over an hour-long, but he gave a well-executed, exciting, fast-paced presentation.  He kept the crowd busy watching a large screen slideshow behind him as he spoke, and he gave hands-on demos of the new Fire HD features. The crowd applauded quite often during the exciting event.  And, it all looked and sounded very convincing. You can view the whole talk on You Tube here.

Amazon’s Kindle Fire HD announcements quickly spread across the various tech review sites, news outlets, and blogs.  The first impressions of Amazon’s new Fire HD’s were generally quite positive, along the lines of these listed below: 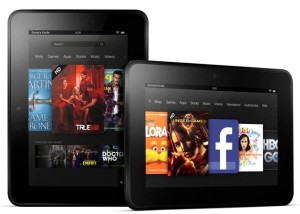 It will take time for more thorough testing of the Fire HD’s, but there are already a number of reviews that provide much-needed in-depth analyses.  Here’s a list of some quite helpful reviews:

The Fire HD 7″ is being touted by Amazon as “the world’s most advanced 7″ tablet” – that’s a mighty big claim to make.  Perhaps, Amazon means the Fire HD 7″ is the most innovative, forward-looking, sophisticated device in the world, though it’s anybody’s guess as to what their broad claim is meant to convey.  Anyone thinking about buying one of these new tablets should really do some homework before pushing their finger and making the purchase.  Just by reading through the reviews listed above, you can learn that the Fire HD 7″ is an Amazon store front consumption device, with the system tweaked for easy access to all Amazon video, audio, books, games, you name it.  Access to anything outside the Amazon-sphere is limited.   If you are already tied to Amazon services, the new Fire HD 7″ might be a logical choice for you, but there are competitive tablets to consider such as the Nexus 7.

The Fire HD 7″ is definitely a nice upgrade from last year’s model, and it provides a bright window into the services Amazon has to offer, yet there are some less-talked about points that are worth noting:

Certainly the new Fire HD 7″ tablet will be a big seller, and it’s a viable option for the right kind of tablet user.   Of all the material that’s come out so far, the article in PC Magazine, written by Sacha Sagan, is one of the clearest and most informative Fire HD 7″ reviews, and it includes the following insightful summation:

PROS:
Gorgeous screen. Very easy to use. Amazon Prime members get lots of video and book content. Multi-user parental controls.
CONS:
Rigidly locked to the Amazon ecosystem. Sluggish on occasion. Other tablets have more apps.
BOTTOM LINE:
The 7-inch Amazon Kindle Fire HD is a great way to consume your Amazon content on a small screen, but it’s not the fastest or most flexible $200 tablet any more.

If you would like to go down to your local computer sales store and gets your hands on a new Fire HD, you won’t be able to just yet, as Amazon hasn’t released any information about in-store availability.  However, you can go to Amazon’s website and pre-order a Fire HD 7″ to be released on September 12, or a Fire HD 8.9″ to be released on November 20.

One last note, a sales projection just in from BGR:  A Digitimes Research Analyst has projected that Amazon will ship 5 million Fire HD tablets in 2012, that’s a considerable drop from the 12 million sales estimation made by Citi Analyst Mark Mahaney just after the Kindle Fire HD announcement last week.

thinking, reading, and writing about whatever's going on in the world...
View all posts by Gary Reiner »
« Apple Wins Big Over Samsung
Juno’s Kitchen & Delicatessen »