After an MLB career spanning 1994-2006, as a gifted defensive catcher, Mike Matheny returned to St.Louis to manage the Cardinals in 2012. He played for the Cardinals during a five year period, from 2000-2004. Matheny has now managed the Cardinals from 2012-2015. His current contract runs through the 2017 season.
.

Mike Matheny is the Manager of the St. Louis Cardinals. He has a degree in Sports Management and Communications with a concentration in Spanish from the University of Michigan.

Career as a Premiere MLB Catcher

During his 13 year career playing MLB ball, in recognition of his defensive prowess as a catcher, Matheny won 4 Golden Glove Awards. Matheny played for four different teams during his MLB career: Milwaukee, Toronto, St. Louis, and San Francisco. In 2005, while in his first year with the San Francisco Giants, Matheny won the prestigious Willie Mac Award for his leadership and character. He is the only first year Giant in their rich history to win the award.

Considered one of the great defensive players in MLB over the last several years of his career, Matheny was one of only three other catchers to play 100 games without a single error. His nickname, used by fans and broadcasters alike, was “The Toughest Man Alive,” after taking a 96mph fastball in the face, and he played the next day.

Mike Matheny’s career ended after a series of concussions that would not allow him to return to the playing field. His style of hard-nosed play, that earned him the respect of his teammates, was ultimately the reason that his baseball career ended. Matheny took his first steps in retirement by speaking to audiences about the dangers of head injuries and helping to develop uniform base line testing that is used in all professional organizations today.
.

The Matheny Manifesto: A Young Manager’s Old-School Views on Success in Sports and Life

Rated #1 in Baseball Coaching on Amazon

Origin of the Book

Mike was asked to coach a youth baseball team and wrote a series of conditions he demanded before agreeing to be with the team. The document was quickly shared virally across the country, at the youth level, high school, college and beyond….and became known as the “Matheny Manifesto.”

Philosophy of the Book

It is about respect, ownership, self motivation and no-nonsense sportsmanship, that all go into the definition of character displayed on a playing field. Mike wants to share it to help players, parents and coaches know how best to work together.

“Nothing worth doing right is easy.”
Mike Matheny 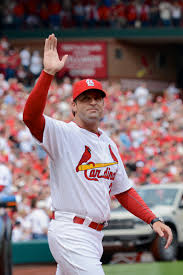 thinking, reading, and writing about whatever's going on in the world...
View all posts by Gary Reiner »
« Android Benefits And Myths – What You Need To Know
Watching First MLB Spring Training Game on MLB.TV »